A pretty place for an original Christmas market.  Unfortunately the chestnuts were aweful.  The rest was beautiful, but judge by yourself.

Home of the Teddy Bears of Inge. I so much love them!

In Cologne is always something to do.

Our visit lead us to the Triangle, the 8th highest building in Cologne, with a magnificant view from 100 meter high  at the ‚altdstadt‘

The Hohenzollernbrücke is known about its many ‚love slots‘ that are chained at the bridge. The loving couples, in tradition, throw the keys in the Rhine.  And what is left … is love.

Visiting Colgne in December makes a visit at the christmas markets (and the mulled wine) obligatory!

It is the most wonderful time of the year….

For many people it also is the most stressfull time of the year.

For photographers it is the time of the year, that nature gets asleep, and the lenses are focussed at the light.  In Germany there are christmas markets at many places.  Herewith a selection of places that I visited this year’s christmas season.

Around the pittoresque buildings of ’schloss Benrath‘

And in the litte town, a few steps away.

The Yule goat’s origins go back to ancient Pagan festivals. While a popular theory is that the celebration of the goat is connected to worship of the Norse god Thor, who rode the sky in a chariot drawn by two goats,Tanngrisnir and Tanngnjóstr it goes back to common Indo-European beliefs. The last sheaf of grain bundled in the harvest was credited with magical properties as the spirit of the harvest and saved for the Yule celebrations, called among other things Yule goat (Julbocken).[2] This connects to ancient proto-Slavic beliefs where the Koliada (Yule) festival honors the god of the fertile sun and the harvest. This god, Devac (a/k/a Dazbog), was represented by a white goat,[3] consequently the Koliada festivals always had a person dressed as a goat, often demanding offerings in the form of presents.[4] A man-sized goat figure is known from 11th-century remembrances of Childermas, where it was led by a man dressed as Saint Nicholas, symbolizing his control over the Devil.[2]

Other traditions are possibly related to the sheaf of corn called the Yule goat. In Sweden, people regarded the Yule goat as an invisible spirit that would appear some time before Christmas to make sure that the Yule preparations were done right.[2] Objects made out of straw or roughly-hewn wood could also be called the Yule goat, and in older Scandinavian society a popular Christmas prank was to place this Yule goat in a neighbour’s house without them noticing; the family successfully pranked had to get rid of it in the same way.

The function of the Yule goat has differed throughout the ages. In a Scandinavian custom similar to the English tradition of wassailing, held at either Christmas or Epiphany, young men in costumes would walk between houses singing songs, enacting plays and performing pranks. This tradition is known from the 17th century and still continue in certain areas. The group of Christmas characters would often include the Yule goat, a rowdy and sometimes scary creature demanding gifts.[2][5][6]

During the 19th century the Yule goat’s role all over Scandinavia shifted towards becoming the giver of Christmas gifts, with one of the men in the family dressing up as the Yule goat.[7] In this, there might be a relation to Santa Claus and the Yule goat’s origin in the medieval celebrations of Saint Nicholas.[2] The goat was then replaced by the jultomte(Father Christmas/Santa Claus) or julenisse during the second half of the 19th century and early 20th century, although he is still called the Joulupukki (Yule goat) in Finland, and the tradition of the man-sized goat disappeared. 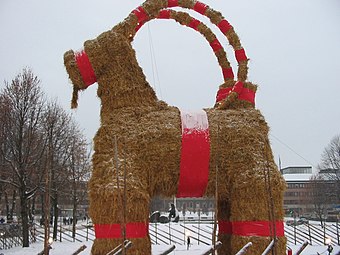 The Christmas goat is mentioned in many older Christmas songs dated back to the late 19th and early 20th century, when the Santa Claus tradition had not been fully established throughout Sweden. Among the songs are Julbocken, Julpolska and Raska fötter springa tripp, tripp, tripp.

With Hildegard and Willi

And here as well the christmas mood is coming

A few impressions ‚made by mobile phone‘ (because of the bad weather) from the christmas activities in the Old Town (Altstadt) of Düsseldorf.  Click at the pictures to enlarge them.

More to come soon, I hope (that should mean better circumstances to photograph  🙂 )

Click at the images below for the christmas markets

if you subscribe to my newsletter you will automatically be updated when there are new items at Saturnsworld.